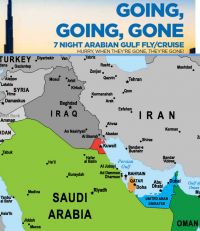 Analysis of the Cruise Industry in the Arabian Gulf

For the 4th consecutive year, the Seatrade Middle East Cruise Forum will provide an important platform for cruise line executives, regional stakeholders and government authorities to gather and discuss key issues impacting the development of the Arabian Gulf's cruise industry.

The Forum has been held in the region for a number of years and been hosted in Abu Dhabi, Bahrain, Dubai and most recently Muscat in Oman.


This year, Seatrade is delighted to announce that it has joined hands with host, Qatar Tourism Authority, to hold the 2015 Seatrade Middle East Cruise Forum in Doha, Qatar.

A day-long conference then follows on for the travel trade, ship agents, airlines, tourism board, ports and destination management companies.

With key networking opportunities throughout, this is an important date in the regional cruise calendar that should be attended by anyone with a vested interest in the future of cruising in the Arabian Gulf.

  
BE THE FIRST TO KNOW ABOUT Tourism Fairs The Portal . . www.sicilydistrict.eu . . Chi
dove in . who Where inside our N. 1 TOP global Tourism
NEW News Date & Location Tourism congress - fairs & Festival
  