Emirates to fly to Bologna daily Dubai by 3 Nov 2015 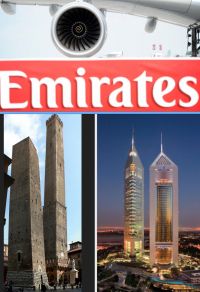  The capital of the Emilia-Romagna region, Bologna will be Emirates fourth Italian destination bringing Emirates weekly flights to Italy to 56.

Set to be operated by a Boeing 777-300ER in a three class configuration, Emirates will offer the only long-haul wide-bodied service to and from Bologna.

 The new flight will add 5040 international seats per week to and from the city, enabling customers in Bologna and the surrounding region to conveniently access key Emirates destinations in the Far East, Middle East, Africa and West Asia.

Known as the European Capital of Culture 2000 Year, Bologna is a vibrant city economic and tourism centre as well as being the perfect stepping off point for travellers looking to explore the neighbouring cities of Florence, Verona, Parma and Pisa.

Passengers on board an Emirates Boeing 777-300ER can experience a wide range of products and services during their flight.

Emirates also operates a daily flight to New York from Milan which will be operated by an A380 aircraft from 1 June.

With the launch of Bologna Emirates will increase its European network to 38 passenger destinations.