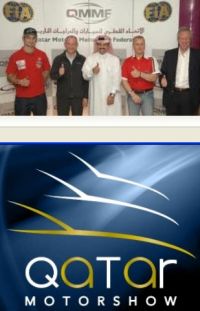 Qatar, which is one of the Gulf States, has expressed its hopes to host a Formula 1 race and is making efforts to attain the required licence.

The country is actually hopeful that they will get the chance to hold the pre season testing session for 2013 season.
It has put forward the Losail Intern. Circuit for the required purposes.

Nasser bin Khalifa Al Attiyah, who is the president of the Qatar Motor and Motorcycling Federation has stated that the talks about the F1 test are already on their way as the officials from FIA, the governing body for auto racing events, have visited Doha, the capital city of Qatar.

- We're awaiting a positive outcome from the FIA to our request to host F1 testing - Al-Attiyah told AFP.

- An FIA delegation came to Doha where they inspected the Losail circuit (motorcycling) and its amenities - he explained, adding that there was - positive feedback from the members of the delegation especially as we have introduced the necessary adjustments on the circuit.

Al-Attiyah also referred to Abu Dhabi and Bahrain who are already hosting the Formula 1 races saying that if they too get the right signal, they will be becoming the third location in the Persian Gulf to host F1 events.

He said, I think we could get the green light from the FIA general assembly in December and therefore we're preparing to welcome the new season testing in F1 in 2013.

The lighting project at the circuit was one of the largest at any permanent sports venue but the Yas Marina circuit in Abu Dhabi beat it.

The circuit is located just outside Doha and was built in just under a year by 1,000 workers. The track is 5.380 km long which includes a main straight of 1,068 metres long.

Al-Attiyah has expressed determination for the testing session and their future in hosting F1.