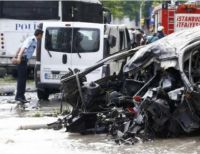 Two people were killed and eight others wounded on Tuesday when a car bomb struck a police vehicle in central Istanbul, News channel Haberturk reported on its website.

The blast, set off by remote control, occurred during the morning rush hour in the densely populated Vezneciler district, media reported.

The area is a commercial hub as well as the location of Istanbul University and is close to key tourist sites like the Grand Bazaar.