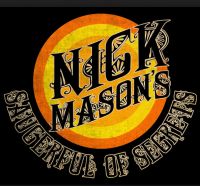 ☀️ Nick Mason s s Saucerful of Secrets featuring Nick Mason, Gary Kemp, Guy Pratt, Lee Harris and Dom Beken is a unique opportunity to experience Pink Floyds celebrated and significant early body of work played live including songs from albums The Piper At The Gates of Dawn and A Saucerful Of Secrets.

☀️Very few bands are as culturally iconic as Pink Floyd: With an estimated 250 million records worldwide, Pink Floyd are one of the best selling music artists of all time.

He has co-written some of Pink Floyds most popular compositions such as Echoes and Time and will be his first live musical outing since Pink Floyd played at the 2005 Live 8 concert in London.