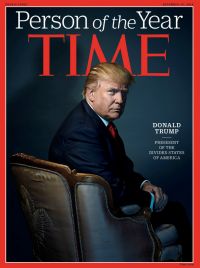 Donald Trump Is Times Person of the Year, to No Ones Surprise

Mr. Trump beat out 10 other finalists announced on Monday, including

 Hillary Clinton;
 Simone Biles, the Olympic gymnast;
 Beyoncé;
 Mark Zuckerberg; and the Flint,
 Mich., whistle-blowers,
the residents and civil engineers who sounded the alarm on lead-poisoned water in the city.

 In 1969, it chose The Middle Americans for the honor, celebrating them for continuing to pray in public schools in defiance of the United States Supreme Court and electing Richard M. Nixon (who himself would become the person of the year in 1971) to the White House.

 Nearly 40 years later, the magazine plastered a mirror on the cover of the magazine and named You its person of the year for 2006.