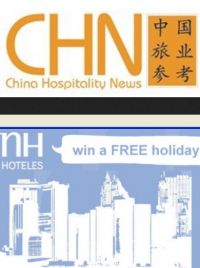 HNA Agreement The Board of Directors of NH Hoteles has approved the entrance of HNA Group in the shareholding of the Company.
The global agreement, which represents an important strategic milestone for NH Hoteles, will result in a capital increase of 20% in NH Hoteles, the creation of a joint venture that will enable NH Hoteles' ENTRY into the Chinese market, one of the fastest growing markets worldwide, the establishment of a commercial partnership that will enhance cross-selling opportunities, becoming NH Group the preferred hotel company for HNA's travelers.
HNA will subscribe a share capital increase for a total consideration of 234M that will be structured excluding preferential subscription rights. HNA will become a new reference shareholder in the Spanish company.
The agreement has approved by the Chinese Authorities and includes the appointment of 2 directors to the NH Hoteles' Board in representation of HNA Group. In this sense, HNA Group has deposited $20M in an escrow account to guarantee its obligations pursuant to this agreement.
In 2011 HNA Group paid US$15M to NH.
The agreement for the development of the hotel business in China between NH Hoteles and HNA contemplates the creation of a joint venture to which HNA would contribute the management of those of its hotels that best fit with the brand image and segment characteristic of NH Hoteles.
The joint venture will then benefit from NH Hoteles' management, loyalty programme and reserves system, will use its brand in China and, at the same time, will build on HNA Group's knowledge and local capacity to identify best hotel locations, local management teams and general logistics of the group in the Chinese market.
This transaction fits in NH Hoteles' strategy of growing through asset-light formulas, such as the management of third-party owned hotels.
Furthermore, the commercial partnership agreed by both companies will aim to direct HNA's travelers to NH' hotels, foster greater client reception from Asia to NH Hoteles and, therefore, increase the diversification of the Company's client base by country of origin.
//// Mr. Adam Tan, Vice Chairman & President of HNA, stated - HNA is pleased to join the existing shareholders and directors in supporting NH management as they continue to build a strong, world-class, multinational and multicultural hotel company.
Agreement HPT NH Hoteles has approved to sign a Letter of Intent and to start an exclusive negotiating period with the North American REIT Trust HPT for a series of hotel investments in Latin America, the USA and Europe.
Agreement is subject to due diligence and final documentation.
The non-binding terms which have been negotiated between HPT and NH Hoteles are as follows: - NH Hoteles would sell 5 hotels (804 rooms) in Latin America (Mexico, Colombia, Uruguay,Chile) to HPT for approximately US$70,000,000, while maintaining a long-term management contract for 20 years with renewal options.
HPT would create a joint venture with NH Hoteles to jointly acquire the entire ownership, manage and undertake a major renovation of the NH Jolly Madison hotel in New York City (USA).
Finally, NH Hoteles would also receive a 170,000,000 loan from HPT, which would be secured by 4 hotels from different locations in Europe.
Both parts expect that once the transaction -detailed in the LoI announced today- is closed a long-term relationship between both companies will be established, especially in North and South America, with the possibility to extend it to other countries.
John G. Murray, President of HPT, has declared: HPT is pleased to be establishing this new relationship with NH Hoteles. We hope the transaction announced today represents the beginning of a long term strategic relationship between our companies that provides each with opportunities for continued growth in the Americas and elsewhere.
Federico González Tejera, Ceo of NH Hoteles said - these 2 strategic transactions fundamental to meet our commitments, to finance our business plan to enhance a growth strategy that will bring NH Hoteles to a leading position. Both agreements prove the strength and value of the NH brand in the worldwide hotel sector that has the capacity to attract global leading partners.
NH Hoteles has been advised in these transactions by Nomura International plc and Banco Santander.

NH Hoteles: Results EVOLUTION 2012
Due to the sharp deterioration in the economic climate in southern Europe, NH Hoteles posted a recurring net loss of 66.9m in 2012, compared to a loss of 9.1m in 2011. As a result of adverse economic trends, particularly in Spain and Italy, the Group tested the recoverable value of its assets on the basis of its business plan, deciding to increase asset impairment provisions to 268m.
As a result, the Group registered a consolidated net loss of 292m. Note that these impairment provisions do not imply any cash outlay whatsoever.
Turning to the Group's hotel business performance, NH Hoteles managed to keep its occupancy rate steady at 2011 levels; however, revenue narrowed by 3.4% on the back of the slowdown in the meetings, conventions and events segment, a drop in restaurant takings and a decline in the average daily rate (ADR).
The business climate deteriorated in Spain and Italy in the last quarter of the year relative to the first nine months. The business travel segment was affected by the adverse economic climate engulfing these countries, prompting significant underperformance by secondary cities relative to the main urban destinations.
The BENELUX business unit gained momentum in the last quarter of the year: despite downward pressure on prices, NH managed to increase its market share.
The occupancy rate in this business segment in 2012 improved by 1.1% across comparable hotels, although the ADR narrowed by 3.4%.
The Central Europe and America business units were the Group's top-performers in 2012.
The occupancy rate in the Central Europe business unit rose sharply, as did pricing in all German cities, with Munich and Berlin standing out. Trends in Latin America were uneven. Whereas Argentina was affected by the decline in demand from 2 of its core issuer markets (Spain and Brazil), Mexico posted a stellar performance, registering growth in RevPar (revenue per available room) of over 10%.
The Company's efforts to boost cost-efficiency translated into a reduction in operating expenses of 0.3% in absolute terms, implying the full absorption of inflation.
Note also that the Company managed to keep its lease expenditure steady in 2012, offsetting the impact of hotel openings, rent increases negotiated in prior years and inflation adjustments.
Revenue in the real estate business rose 30% to 22.1m, up from 16.9m in 2011. Deeds were exchanged on a total of 25 homes in the amount of 10.7m, compared to 1.5m in 2011.
New agreements and openingsIn line with the Group's asset-light growth strategy, 100% of the hotels opened and signed in 2012 are to be operated under the management regime.
- Last year, NH Hoteles signed 5 hotel management agreements (covering 906 rooms in total) in the Dominican Republic, Spain, Czech Republic, Netherlands and Haiti. Meanwhile, it opened 4 New hotels with 673 rooms, as well as extending another 2 existing hotels (adding 180 and 139 rooms, respectively).
- About HNA HNA Hotel Group is the travel subsidiary company of HNA Group. HNA Group is an integrated operator in the service industry, with companies in 7 business sectors which airlines, logistics, tourism, financial services and real estate.
- Currently, HNA Hotel Group owns and operates c.70 hotels in China.
The Asian company owns Tangla Hotel & Resorts Intern. and manages all hotels under the Tangla brand such as Tangla, Tangla Grand Place, The Tang Hotel, Gardenlane Hotel by Tan.
- About Hospitality Properties Trust Hospitality Properties Trust is a real estate investment trust, or REIT, that as of 31st Dec. 2012 owned 289 hotels, 185 travel centers located in 44 States Usa, Puerto Rico and Canada. HPT is headquartered in Newton, Massachusetts, and trades in the New York Stock Exchange.
- About NH Hoteles NH Hoteles ranks third in European business hotels.
NH Hoteles operates c.400 hotels with c.60.000 rooms in 26 countries of Europe, America and Africa. NH Hoteles currently has 20 projects of new hotels being built, that will add more than 2,500 new rooms. NH Hoteles trades in Madrid Stock Exchange.