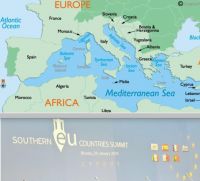 The seven countries that will participate in the summit are France, Italy, Greece, Spain, Greece, Portugal, Malta and Cyprus.

☀️ Immigration will be a major discussion topic according to Cyprus's government spokesman Prodromos Prodromou, who pointed out that his country does not believe that Turkey is adhering to its agreement with the EU about agreement about refugees.

The topics of the summit include immigration, energy, climate change and Brexit.
in Nicosia, is set to focus on the great challenges the EU is faced with today, including the migration crisis, Brexit, energy security, the next multi-annual fiscal framework, developments in the euro area and climate change.

at the Filoxenia Conference Centre, in Nicosia CYPRUS

He further pointed out that some of the greatest challenges Europe is faced with today are of particular interest to the Mediterranean, noting that such challenges include the migration issue and the inflow of refugees.

☀️ is expected that the MED-7 will also discuss the Cyprus problem and President Anastasiades will brief his counterparts on the latest developments.


A joint declaration is expected to be issued after the Summit concludes.

MEMO: - ☀️ Cyprus has been divided since 1974, when Turkey invaded and occupied its northern third.

Repeated rounds of UN-led Peace talks have so far failed to yield results.

The latest round of negotiations, in July 2017 at the Swiss resort of Crans-Montana ended inconclusively.