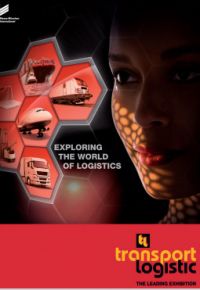 MUNCHEN Germany - in 2013, this established part of transport logistic will be taking up an entire hall, with 11,000 square meters of exhibition space.

Already demand for space in this dedicated section is higher than at the last event.


The world´s LARGEST Trade Event for air cargo
takes place from June 4 to 7, 2013, within the framework of transport logistic.

Compared to the boom years of globalization, capital investment is now more difficult to attract, environmental legislation is tougher and demand has declined.

All of which means a new business model is needed.

Delegates at mariLOG  Intern Maritime Trade and Logistic Conference will be discussing the new challenges facing the sector under the conference subtitle of - A change of course in container shipping: More quality instead of quantity?

mariLOG takes place on June 4, 2013, within the framework of transport logistic.