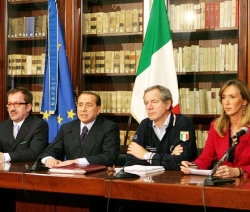 . . . In a further blow Guido Bertolaso, one of Mr Berlusconi's most valued right-hand men as head of the Civil Protection agency, was this week placed under investigation over suspected corruption involving prostitution and kickbacks related to the building of facilities at La Maddalena in Sardinia at a cost of 327 million (£287 million) for last years G8 summit, which in the end Mr Berlusconi switched to L'Aquila.
. . . . Berlusconi aide resigns in corruption probe
By Guy Dinmore in Rome


Guido Bertolaso, right-hand man to prime minister Silvio Berlusconi, resigned as head of Italys powerful Civil Protection agency on Wednesday after being officially notified he was under investigation for suspected corruption involving construction of facilities for last years Group of Eight summit.
Police also arrested four people in connection with the investigation, including Angelo Balducci, a senior official in charge of public works. Special carabinieri forces were reported to have searched Mr Bertolasos home and office.
Guido Bertolaso was one of Silvio Berlusconis most trusted and capable aides.
As head of the Civil Protection agency, which deals mainly with natural disasters and emergencies, Mr Bertolaso, 59, was put in charge by Mr Berlusconi of organising the logistics for the G8 heads of state summit last July.
Italian media reported that prosecutors in Florence were investigating suspected corruption in awarding contracts for the construction of summit facilities on the small island of La Maddalena off Sardinia. Little information was made public at the time, for what officials said were reasons of state security
Last April, Mr Berlusconi abruptly switched the summit venue to a police barracks in LAquila, saying he wanted to draw attention to the citys plight after a devastating earthquake earlier that month. However, commentators also suggested that the venue was moved because La Maddalena was not ready. Most facilities, built on the site of a former naval base, are still unfinished after an expenditure of 327m, according to media reports.
The resignation of Mr Bertolaso removes one of Mr Berlusconis most trusted and capable aides. He was put in charge of the reconstruction of housing in LAquila and cleaning up Naples after the rubbish crisis of early 2008 that played an important part in Mr Berlusconis election victory that spring.
Last month, Mr Berlusconi spoke of giving Mr Bertolaso the rank of minister, giving a vote of confidence just days after the Italian Mr Fix-it had caused a diplomatic incident by harshly criticising US relief efforts in Haiti. The centre-right government was also drawing up plans to give greater resources to the Civil Protection agency and change its status in such as way that it would report directly to the prime ministers office and exercise less transparency in issuing tenders.
Mr Bertolaso said he would give his full co-operation in the investigation and make available all documents in his possession.
Gianni Letta, under-secretary and a key member of Mr Berlusconis inner circle, told reporters he had full faith in Mr Bertolaso, and that he expected the prime minister and the whole government to express their confidence in him.
Ansa news agency quoted a government source as saying Mr Berlusconi did not intend to accept Mr Bertolasos resignation