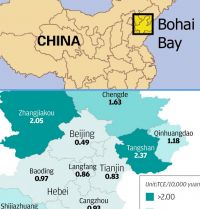 Integration of Beijing, Tianjin and Hebei set to be signature project of Xi Jinping's administration


A New CHINA DREAM: Transform Beijing Into A Seaport

A dwarf version of the proposed Tianjin-Beijing sea water canal: the Grand Canal near Yangzhou

Linking Beijing to the industrial city of Tianjin on the coast, the canal could a more favourable free trade agreement than with the European that slashes import duties on most industrial goods.

Like most of northern China, Beijing is seriously short of water.

The capital needs another 1.5 billion cubic meters a year for its more than 21 million people.

The answer that scientists and engineers of the Beijing Academy of Social Sciences have come up with is a massive canal that would link it to the sea. It would stretch 160 Km (almost 100 miles) and measure 1 kilometer wide.

The water would be desalinized when it gets to Beijing, helping to quench the thirst of the capital.

Linking Beijing to the industrial city of Tianjin on the coast, the canal could accommodate 30,000 ton ships and make Beijing technically a new seaport.

And the dew and mist along the waterway would also improve the local climate, pushing back the lurching threat of desertification.

CHINA FUTURE - It is one of the many grand projects of a country flush with cash.